About the Mooring + Undercurrents Project

An ongoing theme of my work is mooring, the sense of fitting securely into a specific culture and history —a time, a place, a people. There is a relationship between our histories (or our perceptions of our histories) and our identities, whether personal or cultural. It has been said that “communities are place-holders for stories, narratives, and myths,” inferring that geography and others also play a role in the formation of these narratives. 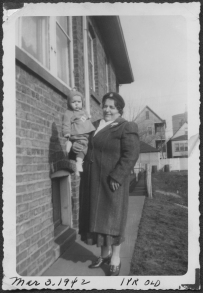 Although it only became clear to me as I sat down to write this statement, this current body of work is the result of questioning my own cultural moorings—an artist eager to create culturally meaningful work, yet struggling with feeling that I did not belong to any particular group for which I could speak. Then I came across the photograph of Anna Pocernich, my (maternal) great-grandmother who immigrated from Croatia toSoutheast Chicago as a young woman early in the 1900s. Her photo seemed so iconic, so heroic. There she stood, seemingly 7 feet tall, wearing her confident grin— larger than life, holding my 1-year-old mother like she was a sack of flour. My whole family is rooted in the working-class steel industry communities of Southeast Chicago—one set of grandparents lived in an area dubbed “Slag Valley” because of its proximity to the hill where Wisconsin Steel dumped train cars of orange glowing slag, lighting up the sky. The other came from the neighborhood of South Deering which is on the west side of the Wisconsin Steel and General Mills properties. The former grandfather and his brother owned a bakery in South Deering, that served these communities and all of the industry for years. These communities were largely built by immigrants since the emergence of the steel industry along the Calumet River, drawing young men and women searching for the “American Dream”—hope, safety, and economic opportunity – often fleeing war torn countries, oppressive economic conditions, or abusive families. Then there was a great-great grandmother on my Dad’s side, Bridget Harrington, who fled Athlone, Ireland just near the end of the Great Famine, boarding a ship in Liverpool, alone, at age 15. All of her family records in Ireland were destroyed, and since no oral histories were passed down, we are left to imagine whether her entire family died in the famine and what that long, long voyage must have been like. The only narrative she left behind was the family she built here with the Italian husband she met on the ship during her trip to America.

I became interested in the stories and contributions that immigrant women made to these Southeast side communities, and began conducting interviews with anyone willing to tell their own story, or the story of an ancestor. Some were willing and available for phone interviews, some e-mailed stories, some graciously sent copies of photographs and other documents. To date I have only collected second and third-hand stories—no women who are current immigrants have come forward to tell their own stories. This in itself poses interesting questions. These women immigrated to the US between the mid-1800s and 1960.

The use of topography is a recurring element in my work and is not intended to represent literal geography, but to serve as a metaphor for the narratives of these women’s lives. Their contributions and influences within these communities become a means of navigation, landforms around which moorings are created. Not all of these stories were happy ones. One woman simply recounted to her grandchildren “life was hard.” Yet they persevered, raised families, ran businesses, supported neighbors, built places of worship, and welcomed other immigrants as they found their places.

I photograph water, a lot. I am intrigued by the constant-yet-transient nature of water, and in the idea of currents and undercurrents. Flux is inherent in all of our stories. The large accordion book, Voices in the Undercurrents contains wave form patterns taken from the audio tracks of my interviews. They represent select portions of the recalled, sometimes uncertain stories of women from Mexico, Germany, Poland, Italy, Ireland, and Yugoslavia (Croatia, Serbia, Macedonia, Slovenia). I am pondering whether these women’s silent voices still resonate as undercurrents in the communities they left behind, and the effect of economic and political undercurrents that threaten to erode cultural moorings. Well-established communities are vulnerable to socio-economic shifting. The Southeast side flourished between about 1900-1970, then in a disastrous turn of events suffered a grave economic blow with the decline of the U.S. steel industry and subsequent shutdown of Wisconsin Steelworks in 1980. It has not recovered to this day. The community struggled with hopelessness and despair, feeling forgotten. Within eight years of the mill closing, nearly one quarter of the 3,400 men and women employed there were dead, struggling with hopelessness and despair, feeling forgotten. “Forgotten” is a word I heard echoed during my interviews. With jobs in scarcity, the neighborhoods and cultural makeup of southeast Chicago have shifted as the children born during its boom moved to work and raise families in more economically prosperous areas, yet immigration continues and new cultural narratives will be, and are being, written.

The goal of this project is to make visible what is hidden, or even in danger of being lost; to honor the lives and stories of the women, past and present, who immigrated to this often-forgotten corner of Chicago; and to give light to the undercurrents of these communities and stories, and the erosion of these cultural moorings.

This entry was posted on February 16, 2020 by Cathy Feeman. It was filed under Blog .